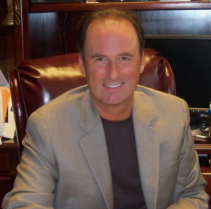 After years of education, he decided to make his permanent home in Sunny Florida where he has lived since 1988.

He has trained a number of Spine Surgeons and has been Director of Florida Spine Care Center’s Orthopedic Spine fellowship program. Additionally, Dr. Broom has been involved as an instructor in the Orthopedic Residency Program at Orlando Regional Medical Center.

Dr. Broom has published numerous articles regarding disorders of the spine including a chapter in a major orthopedic surgery text book. He has an appointment as an assistant professor of Orthopedic Surgery at UCF College of Medicine and is often requested to lecture at educational conferences and meetings.

Dr. Broom is a proud recipient of The Patient’s Choice Award for excellence in healthcare in the state of Florida and is honored to be nominated by his patients and colleagues for many other awards and accolades.

Dr. Broom is married to a charming woman named Jet and has six children and one stepchild. Several of his children have decided to also make a career in healthcare. Michael Jr. is in medical equipment and sales, Christina Broom has made her career as a Physician’s Assistant, Angela Broom as a Nurse Practitioner and Jennifer Broom is currently enrolled in nursing school. His second son, Kevin Broom is currently employed by Apple as a software engineer and his step daughter, Heather is employed by Google. The youngest of the family, Stephen, presently attends high school and Dr. and Mrs. Broom plan to give him a few more years to figure out his career path.

The doctor has many hobbies which include tennis and water skiing and is also an avid reader of both fiction and non-fiction. His favorite band is the Beatles and his favorite sports team is the New York Yankees. He has a large collection of memorabilia that has been given to him throughout the years by employees, patients and friends. Dr. Broom continues to receive great satisfaction in helping his patients overcome their injuries and ailments so that they can lead healthier more active lives and plans to do so for a very long time.